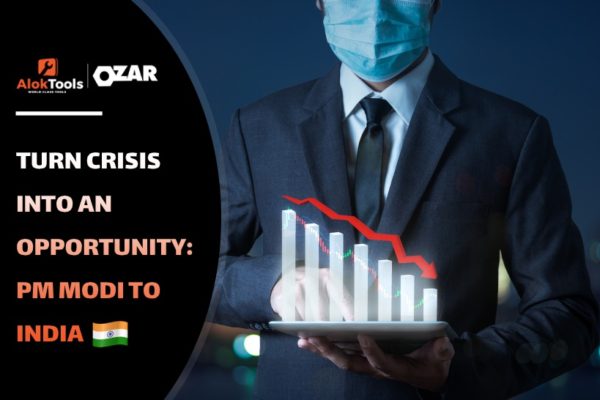 Turning a Crisis into an Opportunity: India all set to Take Centre Stage on the Global Manufacturing Arena

Covid-19 pandemic is one of the biggest crisis faced by the world in recent times. Even disastrous wars like World War I and II did not affect so many countries at the same time. Different countries are at different stages in tackling the Coronavirus. On the medical front, it looks like we will soon reach the end of the pandemic – thanks to the several clinical trials underway for a vaccine.

However, the pandemic is far from over on the economic front. The Covid-19 pandemic has put an end to the current world order that began in the early 90s. China, often referred to as the world’s factory is no longer considered a trustworthy ally.

Currently, one-third of global manufacturing originates from China. There is a growing distrust for China among major superpowers like the US and Japan. Even before the Coronavirus outbreak, the US started engaging in a cold war with China by imposing trade tariffs. The Covid-19 pandemic originating in China and the country’s initial mishandling of the pandemic has further increased the distrust for China among the global superpowers.

Recently, the Chinese forces have flexed their muscles in Ladakh, the South China Sea, and the Indian Ocean. The escalating geopolitical tensions between China and its neighbours are further accentuating this shift.

The Japanese government recently announced several incentives for Japanese companies looking to shift base from China. Besides, several countries, including India, are unhappy with how the Chinese government has been making profits from the pandemic by acquiring the shares of stressed companies in Asia and the rest of the world.

Many of the world’s developed nations are uncomfortable with the idea of a Chinese-dominated global order. Countries don’t want to rely on China for their goods. This presents a huge opportunity for India – an emerging superpower in Asia and the one best suited to overtake China’s position as a global manufacturing hub.

The Silver Lining of the Crisis: India Moving from Survival to Revival

India has several strategic advantages to emerge as the next big global manufacturing hub. A large domestic consumption market developed capital, skilled, cheap, and diversified workforce, and above all, a stable democratic setup – make India the best choice for global manufacturers in the current scenario.

India has already demonstrated to the world that it’s world-class in several sectors. The IT services industry in the country is one of the best in the world. It supplies a vast majority of the workforce to Silicon Valley. Besides IT services, India is also a world leader in auto parts manufacturing, pharma, and engineering.

While these are inherent factors that work in India’s favour, the country is also refining several other factors to help it achieve its goal of manufacturing excellence.

The Prime Minister, Narendra Modi, recently highlighted the importance of “Aatmanirbhar (self-reliance)” and urged citizens to be “vocal about local.” The country is poised to become self-reliant, along with a commitment to global welfare.

If we look at history, we can see that manufacturing is the key to prosperity. England was able to achieve world dominance in the 19th century due to industrialisation. In the 20th century, countries like Germany, USA, and Japan emerged as developed economies due to their rapid industrialisation. Recently, countries like Taiwan, Korea, and China have transitioned from emerging economies to developed nations thanks to their manufacturing process.

India is set to chart its manufacturing growth with the help of several factors like technology, a resilient workforce, and a favourable political environment. India is taking several measures to attract foreign investments. Recent investments made by Facebook and Google demonstrate the trust of global players in India. Recently Apple announced that it’s looking to expand its manufacturing line in India.

While it’s true that several factors work in India’s favour, there’s no denying that timely reforms are needed – especially in labour and land. However, there is a sense of urgency among all sections of the society to transform India’s narrative from “survival” to “revival” in the post-Covid-19-era.

Like other big crises, the ongoing Covid-19 pandemic will have a long-lasting impact on the global order. While there’s no denying the tragic human loss due to the pandemic, we need to move forward to emerge stronger. India is headed in the right direction, by leveraging the power of technology and human capital to emerge stronger in the world of tomorrow.